Saturday morning Jon and I leave our hotel and walk the one block to the beach. We’re on our first trip since shelter-in-place began, a one-night sojourn to Santa Cruz for our anniversary. The thick gray fog has lifted, and all across the beach a floating veil of mist visible to the naked eye is being sucked back into the sky. I wonder if this process is unique or everyday. I’m just an interloper. Either way, I get to bear witness.

The seagulls and pelicans are a high-wire balancing act, one by one tracking an almost identical path to an old pier at the other end of the beach. The pier has fallen into disuse, with multiple pairs of barnacle encrusted legs walking into the water. It ends abruptly mid-air, road to nowhere. Just beyond, a half-sunk house rests at a cockeyed angle —the front door tilted diagonal to the onrush of waves.

A few dogs lope by. Fishermen cast their long lines. And the mists keep rising above our heads, ghosts departing this earth.

“What a place for a house,” I say as we get closer to the pier. 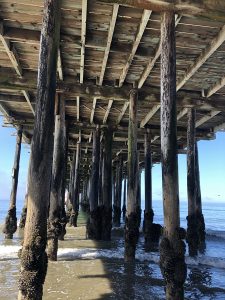 “Or maybe it used to be a restaurant,” Jon says. “That would make more sense.”

Then all at once the house is no longer a house or a restaurant, but resolves itself into a broken ship, the prow nosed up and the midsection and stern broken away. What I thought was a front door turns out not to be that kind of door at all, but a cargo hold or something that shifted from the level of the horizon, not the vertical. One by one, the seagulls complete their chute of air current and land on the edge of the sinking ship, exchanging places with a line of other gulls ready to head back the other way.

Though you can no longer walk the length of the shuttered pier, you can still watch its feet marching into water. Maybe it was the 1989 earthquake that destroyed it. Maybe anything. Later I will look up the real story of what happened on this beach and fill in the missing gaps. For now, it’s more fun to imagine the story of how it all began, and how it will end.

Crowing From the Darkness

I’ve done my best to keep a positive outlook throughout this COVID-19 pandemic, stay safe, and follow the rules to keep everyone else safe. When the first shelter-in-place order came down from Sacramento March 19, those first weeks were surreal. Back then we thought it would be a short-term thing, we’d lick it, and move on with life. We were constricted to our own neighborhoods, and told not to drive anywhere except for doctor, pharmacy, or grocery store.

So, I savored the incredibly clean air that was just beneath all that car exhaust. An Amazon Prime delivery truck might circle by. Otherwise the middle of the road belonged to walkers. The leaves on the trees were so green, the outlines of branches sharp and crisp. And I could hear my own thoughts! It was quiet! If I rode my bike to the bay I could see a clear outline of San Francisco in the distance. The weather was fine. The neighbors were friendly. Our teenagers were home. And we had a sometimes working internet connection.

I partook of a plethora of literary and writing offerings. Book tours and concerts were suddenly available online free or cheap to all, with location no longer a deterrent, too many to even attend. I Zoomed and Zoomed and Zoomed. I wrote a lot. I did online pilates. I adjusted. I found the silver lining.

Over the next several months, restrictions ebbed and flowed, cars took back some of the streets, construction and gardening noise returned, and the fine, fresh edges receded. But still, I stayed positive. We were lucky. Things were inconvenient, but we were safe. We were alive. We were healthy.

Then the heat waves, then the fires and the smoke. Then friends having to evacuate. 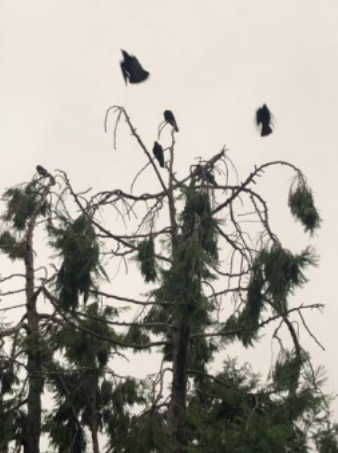 And then I woke up Wednesday, September 9 at exactly six, like Bill Murray in Groundhog’s Day. The light was muted and blank-looking. It didn’t look like morning. Something was wrong. But I took the dog for an early walk. We’d had two weeks of baking heat wave; you had to go early if you wanted to get out at all. By seven we were walking beneath a strange urine-colored sky.

The crows perched in their high tree, and didn’t seem to care at all about the change in circumstances. They cawed loudly as ever, gloating in the curdled atmosphere. Bring it on, they crowed in their harsh language. Bring it on!

And, you know what came next. If you don’t live in the Bay Area, you saw pictures. Everywhere, the sky turned from yellow to an eerie orange glow against the black outlines of trees. Instead of getting lighter, the day got darker, the sun all but blotted out. We had to turn on the lights. Cars needed their headlights. The streets were mostly quiet again. I felt like I had to stay very quiet.

No filters, we kept saying as we posted our glowing orange pictures on Facebook. No filters! The hours passed and it got darker still. It was a relief when real nighttime came.

The next day the weird orange glow was gone and the smoke from the fires had sifted down to breathing level. We were forced to stay inside with the windows closed, AQI (air quality index) hovering near 200, unhealthy to very unhealthy depending on which app you used. I heard the crows still out there cawing in their glory, smoke be damned.

Finally, after a full week of this, even I broke a little. The world felt shifted off course. Of course it had been shifted off course for a while, I’d just been trying for that silver lining. But I couldn’t drum up that positive outlook anymore.

This weekend is six months since our first shelter-in-place order. It’s also Rosh Hashanah, Jewish New Year. The sky has cleared, the air is fresher, at least for now. Many, though not all, of the fires have been contained.

But Covid-19 is still with us. Sickness, death, injustice, climate change, violent weather and all manner of loss caws its all too earthly cry. Now we’ve lost Ruth Bader Ginsberg, too. We’ve lost so much.

But it is a New Year, and I can only hope it will be a good one. That we will come back from all of this, that we will come together and change for the better. That, sort of like the crows, we, too will have a perch to share, and a new outlook. 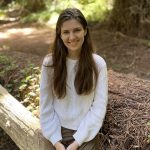 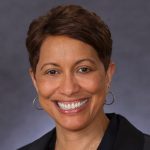