I was 19-years-old in the fall of 1966 when my friend Barbara and I drove my two-tone 1956 Chevrolet to Baltimore, Maryland, where I was to have an illegal abortion. 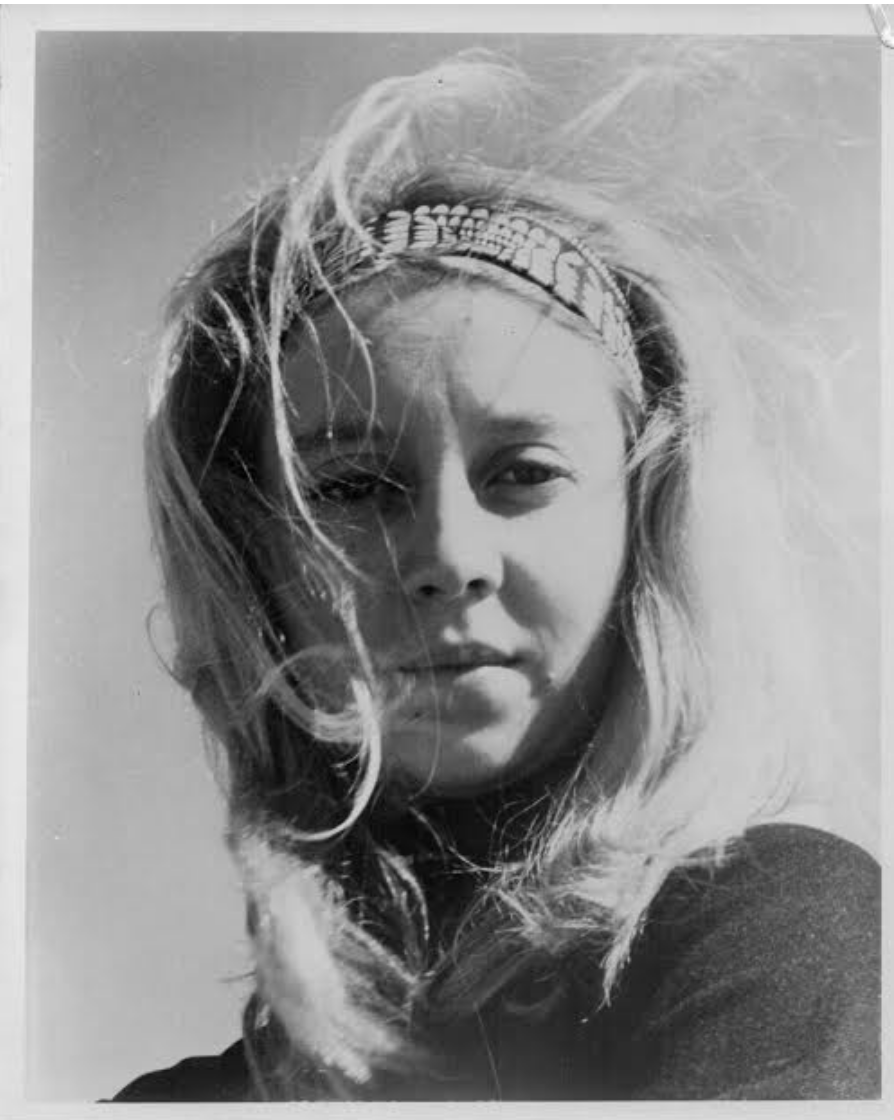 One afternoon, a few weeks prior, I had returned from school, pulled into my driveway, parked, and stepped out of the car. I was loaded with books and bags and papers. Suddenly, Bo, my ex-boyfriend, was right there. I screamed from the unexpectedness of him. He was angry; I broke up with him. He grabbed my arm; the books and papers went flying. I thought he would kill me but instead, he ripped my clothes off and raped me on my car’s hood. Right before he got into his car and drove away, he banged me on the head. I never saw him again.

I slid off the car and fell into the dry brown leaves. I dressed. With leaves still in my hair, I slowly walked up the apartment steps where I lived with my parents. My father greeted me when I walked through the door.

He asked me in Russian, “Как поживаешь?” How was I doing?

I answered, “Нормально, всё нормально.” Everything is fine.

After swallowing many quinine water glasses and drinking vast amounts of alcohol in failed attempts to abort, I managed to obtain $500 from a friend for the abortion. Barbara and I scraped up the rest of the money for a hotel room and gas — there was not much left for food — a minor consideration.

I had the instructions memorized. I was to go to a certain Howard Johnson Motor Lodge in Baltimore. I was to check-in, get a room, and wait for a taxi that would pick me up at a specified time. I was instructed to be alone. I was not frightened. I was in deep denial of the danger that awaited me.

It was dark when we got to the Howard Johnson. We checked-in. I looked out the window and noticed a taxi waiting at the entrance. It was time to go. Barbara and I hugged and I walked alone, down the hall, into the lobby, out the door and climbed into the taxi. I felt like I was moving in slow motion. My blinders were on. My thoughts were not on the danger of what was to come but the necessity of going through it, to get it done and move on.

The cab driver told me to lie face down in the car’s back seat and not to get up. I did as I was told. I felt the taxi winding around curves and going uphill. About twenty minutes later, we stopped at a dark house. He told me to go in. I was greeted by a woman who asked me for the money. She took the envelope of cash and told me to go into an adjacent room, take off my clothes and put on a paper dress. I went into the room and there was a woman lying on her side on the bed in one corner, groaning. We didn’t speak. I didn’t want to know. 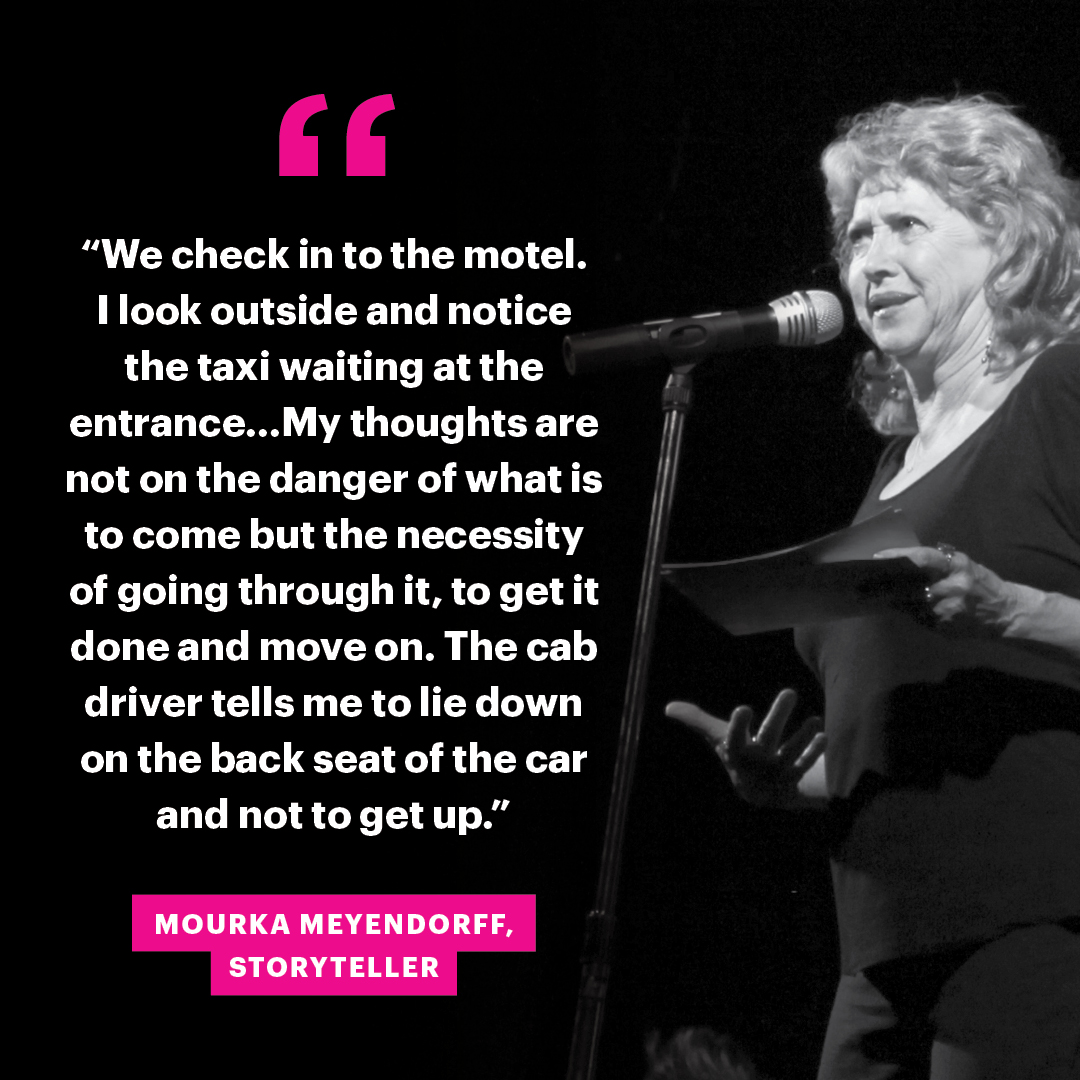 I soon walked into a very bright room and was told to lie down on the cold metal flat bed and put my feet into the stirrups. My legs began to tremble. The doctor and nurse were wearing sunglasses. The operation began. The doctor told me that there would be cramping but I was not given anything for pain. As it intensified I felt tears rolling down my cheeks. The procedure lasted fifteen minutes but felt like an eternity.

And then it was over.

The doctor asked me if I wanted to see the fetus. I said no. I was led into the original room. The woman was gone. I was told to lie down for a while that they would come for me. It was in this quiet moment that I realized what just happened. I could bleed to death. I could get an infection. Would I see Barbara again?

In about twenty minutes, I was given some pills for the bleeding and some menstrual pads. I got dressed and slowly and painfully walked out of the house and into the waiting taxi. Again, I was told to lie face down on the back seat. Also, I did as I was told.

Finally, the taxi dropped me off at the Howard Johnsons. I walked down the hall and was so relieved to see Barbara rushing towards me. We hugged. It was over.

The next morning, I wasn’t bleeding too badly. My angels were working overtime. I was going to make it. Some women die. I was one of the lucky ones.

Mourka wrote and performed her story as part of TMI Project’s 2013 production, What to Expect When You’re NOT Expecting: True Stories of Slips, Surprises, and Happy Accidents, a collection of true stories centered on the ways people exercise freedom of choice when faced with an unplanned pregnancy. 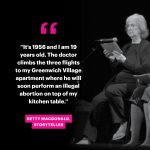 The Lucky Ones: Betty’s StoryReproductive Rights, Stories, Stories for Choice 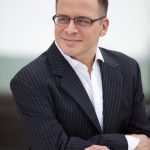